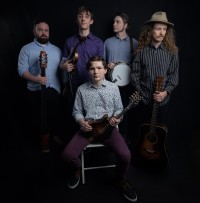 Rapidly rising on the bluegrass scene, Billboard-charting artists Liam Purcell & Cane Mill Road perform internationally and stateside winning both industry awards and the hearts of fans who turn out to see them at some of the industry’s most iconic venues.

Growing up just down the road from Doc Watson, Liam Purcell leads Cane Mill Road as they rock the traditional bluegrass standards they were raised on, yet boldly write original music with roots in the fertile grounds of bluegrass, old-time, and Americana. Their powerful arrangements and dynamic stage presence have landed them main stage slots at legendary festivals across the country.

Named Momentum Band of the Year by IBMA in 2019, Liam Purcell & Cane Mill Road have been recognized as one of the fastest growing bands in the industry. Their latest release "Roots" debuted at #6 on the Billboard Bluegrass Album Charts, joining their three previous albums for a total of 12 weeks in the Top 10.

"The future of bluegrass..." No Depression

"Making their mark on bluegrass and fueling the future" Bluegrass Unlimited

“Cane Mill Road, based less than six miles from Deep Gap, North Carolina, the home of Doc Watson, draws its inspiration from the late singer/guitarist whose musical imagination gathered inspiration from the deepest Appalachian roots while courageously finding connections to almost all elements of American music...the band has quickly ignited a spark that has led to a recording contract with Patuxent Music and early recognition from the International Bluegrass Music Association” No Depression