Per the current CDC guidelines we are requiring masks to be worn when you are inside and away from your table.  We have masks available.  Thank you in advance for your understanding. 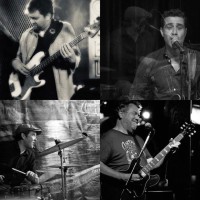 The S.C. Blues Alliance is a Charleston based blues collective founded by John Picard, Brian Widlowski, Eddie Phillps, and Ross Bon. The Alliance is made up of a dozen musicians in the Lowcountry of South Carolina with a common interest, and shared vocabulary in the blues.
Drummer Brian Widlowski is from Charleston S.C., where he began performing professionally the late 90s. As a student of recent Grammy award winning drummer Quentin Baxter, he graduated from The College of Charleston with a major in Jazz Performance. Over the past 25 years Widlowski has performed many styles and venues throughout the U.S. from local bars, to opening for Ray Charles at The Charleston Coliseum. Brian currently resides in Brevard.
Guitarist, Eddie Phillips, is a native of Lancaster, SC. He relocated to the SC Low Country in 1977. He has performed professionally since he was 18 years old. His musical influences are from all over the music spectrum, but he has a particular fondness for traditional blues. Eddie has toured and performed extensively throughout the eastern US, numerous countries in Europe, Columbia and Macau (China); playing a wide variety of music festivals including the Chicago Blues Fest, Pocono Blues Fest, Lugano (CH) Blues to Bop Fest, Cognac (FR) Blues Fest, the Lionel Hampton Jazz Club (Paris) and the Maxwell Café (Paris) to name a few.
Ross Bon (vocals, guitar and harmonica) was part of the Chicago music scene beginning in 1992, where he recorded with artists such as Willie “Big” Smith, Buddy Scott, Pinetop Perkins, Junior Wells, Dave Specter, James Cotton and Kim Wilson. In 1995, he joined with guitarist Gareth Best, bassist Jimmy Sutton, drummer Bob Carter, pianist Donny Nichilo and saxophonists Samuel Burckhardt and Jerry DeVivo to form the Mighty Blue Kings. They made their debut performance opening for the late Junior Wells at Buddy Guy's legends in Chicago; and followed up with a weekly residence at Chicago jazz club The Green Mill. Later, the band toured the US. The band's lineup for their 1997 release, Come One, Come All, consisted of Bon, Best, DeVivo on drums, bassist Brett Simons, keyboardist Simon Sweet and saxophonists Jonathan Doyle and Mark Colby. The Mighty Blue Kings disbanded around 2001. In early 2010 Ross Bon formed a new band under the name, Ross Bon & The Mighty Blue Kings.
Todd Edmunds is a bassist and sousaphonist from Augusta, Georgia. He has performed in a wide variety of musical situations. His exposure to the blues circuit came as a five-year stint as full-time bassist for Jason Ricci & New blood. He is a lifelong student of music with a foundation in jazz.
Don Merckle
A darkly honest and wry singer/songwriter out of Charleston, South Carolina, Don Merckle’s songs are firmly planted among the fertile mixed traditions of American music. He is a workman's poet, capable of delivering a rock and roll growl or a quiet dose of smoky barroom introspection with equal passion.
Don is a veteran of the indie music scene in the Southeast. He founded the popular Appalachian/Irish outfit Loch Ness Johnny in 1998. He co-fronted the rambunctious Alt-Country band American Gun from 2005-2010, and in 2011 he created the jaunty Don Merckle & the Blacksmiths. At the end of 2019 he ended that project to focus more completely on song craft. In his current solo work Don is leaning into more stately and thoughtful singing, a style that highlights the darkly emotional lyrical contours that are the hallmark of his best work.
Don has performed relentlessly across the southeast for over 20 years at clubs and festivals. He has shared stages with acts like Drivin' N Cryin', Lucero, Shooter Jennings, The Avett Brothers, Cracker, and more. His latest work has a sound and feel that ably captures the blend of American roots music and rock and roll at the heart of his songs, all delivered with the kind of effortless roots-rock sweep which has made Jason Isbell and The Avetts into household names.
On his new album, Rumor of a Ghost, Don worked with the producing and recording team of Evan Simmons and Zac Thomas to experiment with new sonic ideas. Don's thoughts about this collaboration? "This is probably the most excited I’ve ever been about a record I’ve made. We’ve explored each song to work individually while simultaneously constructing a through line that binds them together as a whole. Zac and Evan have really helped push the boundaries of what I think people expect from me and I couldn’t be prouder of the result.”
Tweet