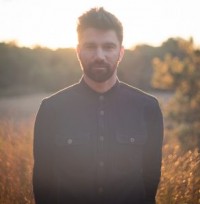 Global citizen and folk singer Eli Lev is making the world a smaller place, one song at a time. Eli pens hymns for everyday enlightenment—songs that resonate because they’re heartfelt, earthy, and offer wisdom culled from self-discovery.

His recent four-album project is inspired by the wisdom and majesty of the Navajo Nation’s four cardinal directions. Each album is a carefully curated experience with a distinct musical aesthetic and conceptual threads aligned within this overarching and sacred indigenous perspective. His first release, All Roads East released in 2017, with Way Out West just becoming available on December 14th, 2018. Together, this four-part series imaginatively and intrepidly connects spheres and generations with a body of work that is irresistibly uplifting, emotionally resonant, and groundbreaking.

In just two years as a full-time musician, Eli has built a robust profile through wowing audiences each time he picks up a guitar. He has opened for national names like Shooter Jennings at The Fillmore in Silver Spring, Maryland and Ellis Paul at Jammin Java in Vienna, Virginia. Eli has appeared at Burning Man in Black Rock City, Nevada, Music on the Mall Festival in Washington DC, and at Kennedy Center Millennium Stage for the METRO Performs Series.

With regional, national, and international tour dates coming up for 2019, Eli currently maintains a full schedule performing on what he has playfully dubbed the “Beltway Tour.” The tour boasts an impressive series of appearances at hundreds of venues throughout DC, Maryland, and Virginia at festivals, clubs, house shows, and special events, including a special invitation to perform at the US Capitol Building by DC Congresswoman Eleanor Holmes-Norton.

Eli’s latest four-part album series represents an unprecedented artistic feat. The albums offer four distinct viewpoints of folk music, showing that folk is a heartfelt intention and not a genre sound. At the most basic level, his first release in this series, All Roads East, is a traditional folk album with a full, organic sound. The title has multiple interpretations. It’s a tip of the hat to spiritual Eastern philosophical practices. It’s also a tribute to Navajo culture, where being directionally oriented east aligns you with sunrise and the newness of life. The album has been featured on CBS Radio, Buzz Feed, and Paste Magazine for its blend of country, folk, Americana, soul, and pop, while being free from any specific tradition. A highlight is the sweetly pensive “Making Space”, which Eli calls “My manifesto, it’s my vision of the world creating space to be a community and casting aside artificial classifications that separate us.”

The follow up album, Way Out West, is an adventurous, futuristic folk album with bold electronic touches and experimental soundscapes. On the album, Eli artistically references the untamed nature of the west as it has been represented in popular culture. “It’s that dangerous, fertile area that is unexplored. On this album, it’s emblematic of me pushing the boundaries of folk music,” Eli shares.

To date, the band has performed at premier DC venues such as The 9:30 Club, Pearl Street Warehouse, Songbyrd Music House, DC9, and the Rock and Roll Hotel to name a few. With marquee performances at The 202 Music Festival in DC, Takoma Park Folk Festival in Maryland, and Reston Town Festival in Virginia, the band is quickly becoming a regional sensation as they mix country, rock, folk, and soul on stage.

“The most meaningful thing for me is being able to express through my music what I’ve always felt about humanity. I want to bring people in, make them feel special, and break down the walls that keep us apart.”