A resident of Brevard since 2019, Jon Weisberger spent more than 20 years as a touring bass player before settling in Western North Carolina. The recipient of the International Bluegrass Music Association (IBMA)’s first Songwriter of the Year award, he’s had more than 200 of his songs recorded by artists ranging from traditional bluegrass to Americana, including on recent Grammy-winning albums by Billy Strings, the Infamous Stringdusters, the Travelin’ McCourys and Mark O’Connor. In the studio, he has worked as a producer with Aaron Burdett, Anya Hinkle, Fireside Collective, Unspoken Tradition,Tray Wellington and other Mountain Home Music Company and Organic Records artists.  Just a few weeks ago, he shared in the IBMA’s 2021 award for Instrumental Recording of the Year as the producer of “Ground Speed,” featuring Kristin Scott Benson, Skip Cherryholmes, Jeremy Garrett, Kevin Kehrberg and Darren Nicholson.
Joining Jon are four stellar young musicians from around the area.  Each has been a recipient of the IBMA’s Momentum Awards, given every year to the best among rising artists at the organization’s annual conference.
A 2017 Momentum Instrumentalist Award recipient for her fiddling, singer Carley Arrowood is a Mountain Home recording artist who has enjoyed recent success with hits that include “Goin’ Home Comin’ On” and “My Kind of Nightlife”; she also collaborated with 185 King St. favorite Travis Book, Steve Martin Banjo Prize winner Sammy Shelor and others as part of Mountain Home’s all-star series under the “Bluegrass At The Crossroads” rubric, and has appeared on recent recordings by Aaron Burdett and Chris Jones & the Night Drivers.  Carley’s husband, Daniel Thrailkill (guitar), performs with her as well as with his own group, The Trailblazers; in 2018, the group was named Momentum Band of the Year, while Daniel took home the individual Momentum Vocalist of the Year trophy.
David Benedict, a member of last year's IBMA New Artist of the Year, Mile Twelve, is the creator and host of popular YouTube series “Mandolin Mondays,” and earned his own Momentum Instrumentalist award in 2018.  His wife, banjo player and guitarist Tabitha Benedict, was named a Momentum Instrumentalist in 2020; she performs with the all-female, all-star Anglo-Irish Midnight Skyracer, and both she and her husband also appear with her brothers in Northern Ireland’s Cup O’ Joe.  In 2020, they began making duo appearances as The Foreign Landers.
Expect an evening of musical variety, ranging from solo and duo performances to full band settings of songs by all of the musicians involved! 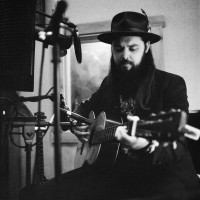 Hat's Off to a New Year with Dr. Bacon